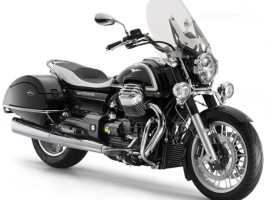 I purchased a left over 2014 Moto Guzzi California Touring motorcycle about a year after retiring. I bought this bike in December 2016. I spent lots of time and energy researching large highway cruiser style motorcycles. In the end I chose the Moto Guzzi for its aesthetics, value and reputation. The two year unlimited mileage warranty was also appealing.

During the first 14 months of ownership I put 13,000 miles on this bike and discovered a number of assembly flaws, performance issues and what now looks like drive train failure in progress. This last issue is a grabby clutch which began to develop after 6,000 to 8,000 miles. At first it was minor but the grabbiness has increased to the point of being unsafe. I've petitioned Piaggio to have it repaired and I'm currently attempting to get them to look at it. Unfortunately I have had to resort to legal measures to get a response from Piaggio. I tried using the New Jersey Lemon Law, but my application was rejected in early March 2017. Thr reason for rejection is that I have not given the manufacturer two attempts to fix the problem. The dealer whom I bought the motorcycle from, Eurosports in Coopersville, PA, told me that Piaggio requires that I sign a "Permission to disassemble for inspection to determine warranty coverage" form. I chose not to sign it because I felt that in the end Piaggio would rule that a clutch is a consumable product and not cover the repair cost. To replace a clutch in one of these Calafornia 1400 engines requires 18 hours of shop labor; the engine has to come out.

It is now mid March and the riding season is approaching. I'm considering having Eurosports disassemble the clutch for inspection. The more miles I put on the bike the more likely Piaggio can claim normal wear and call it my cost to replace a consumable entity.

Below you will find links to supportive documents explaining my experiences with my California:

Video of clutch issue on the street